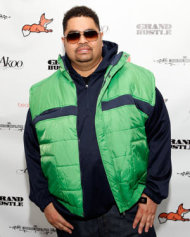 “He was transported from a residence in Beverly Hills and was taken to a local hospital where he was pronounced dead in the emergency room,” Harvey told People. “The cause of death is yet to be determined; we’re investigating it now. We do know that he last saw his doctor two weeks ago.”

According to TMZ, the artist, whose real name is Dwight Arrington Myers, was pronounced dead at 1 p.m. today after being taken to a Los Angeles hospital.

At around 11:25 a.m., a 911 call was reportedly made, reporting an unconscious male outside.

TMZ reports that the “Now That We Found Love” rapper was conscious and talking when he was taken to the hospital.

There are reportedly no signs of foul play.

Heavy D appears in the Ben Stiller and Eddie Murphy film “Tower Heist” and performed an old school set at the BET Hip-Hop Awards in October.

Stephen Hill, BET president of music programming and specials, said Heavy D was in good spirits when he performed at the hip-hop event. ” I’m so glad that we got to work together for his performance at last month’s BET Hip-Hop Awards,” Hill said in a statement. “Hev was focused, energetic and happy;Â  he worked HARD, as he always had, to excite the crowd.”

Hill added that Heavy D was known for his showmanship. ” When Hev showed up, you knew the show was about to go down,” he said. “Smooth on his feet and nimble with his tongue, the overweight lover/rapper/dancer was one who truly believed in the fun of hip-hop. Choreography? In rap? Yes!”

Ernie Singleton, who was the president of black music of MCA Records when Heavy D joined the label in 1986, considers working with the artist as a highlight of his career. “Having the pleasure of signing Heavy D through the Uptown deal was one of the greatest experiences of my life,” he told Yahoo! Music.

Heavy D & The Boyz was the first act released on Uptown Records, an MCA subsidiary that boasted a roster including Al B. Sure, Mary J. Blige, and an intern-turned-mogul Sean “Puffy” Combs.

Singleton said releasing Heavy D first was an obvious choice. “We were putting a compilation together. Heavy D’s song ‘Mr. Big Stuff’ was a runaway record and there was an album done on Heavy D. â€¦ When you sign an artist and everybody is reacting very positively to it, it doesn’t take a rocket scientist to speed up the process and get a record out.”

Heavy D collaborated with a number of artists over the course of his career. He appears on the remix of Janet Jackson’s song “Alright” from her “Rhythm Nation 1814” album, and on Michael Jackson’s “Jam” from his “Dangerous” set. His biggest single was his 1991 song “Now That We Found Love” that reached No. 11 on the pop charts.